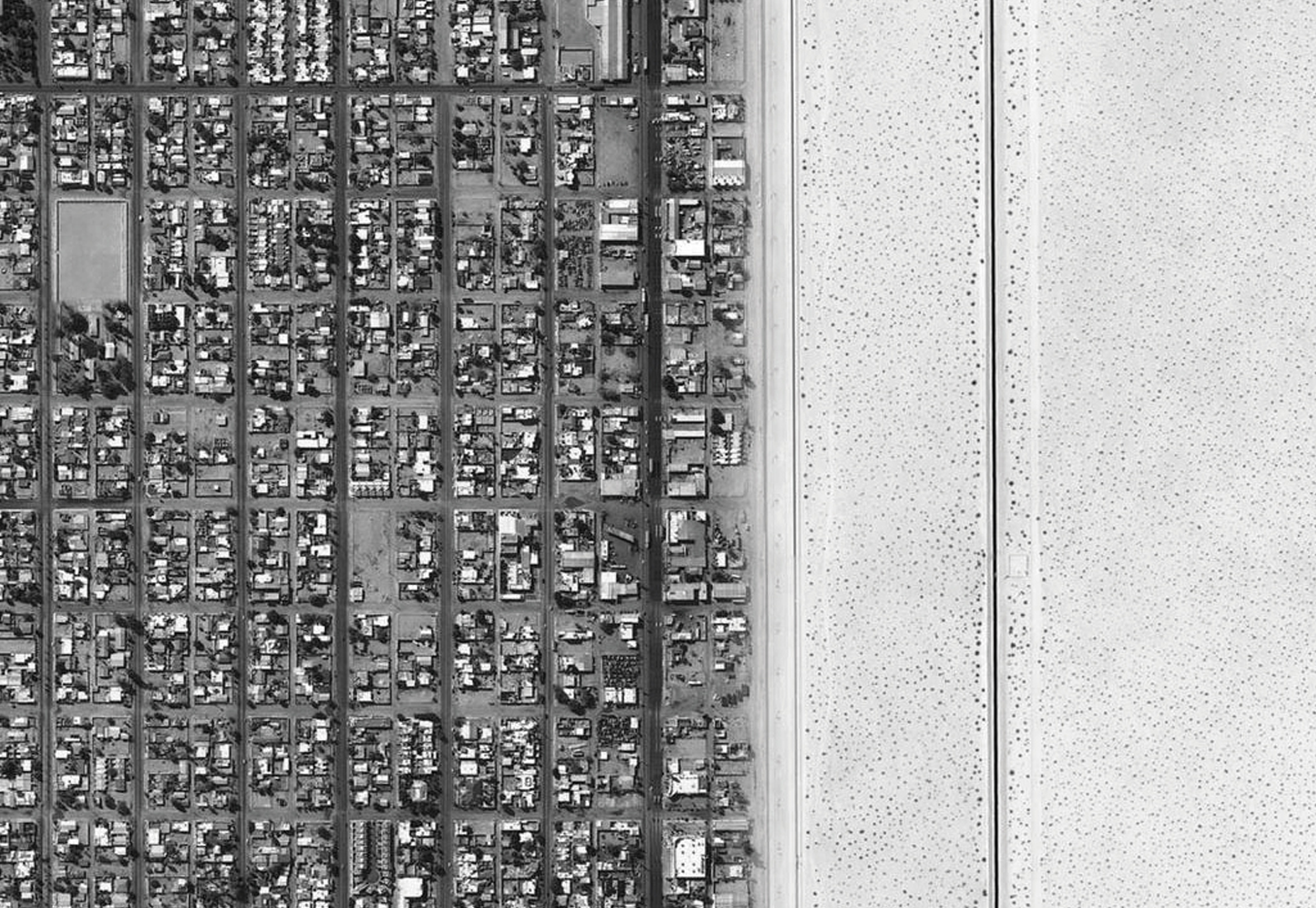 The second iteration of Field Station studio focuses on the urgent issue of Shifting Borders. Geopolitical borders are under pressure and shifting between dissolution or reinforcement. Our environment is increasingly mediated through digital technologies, eroding borders between material and virtual, while simultaneously giving rise to new geographies and introducing new borders. Many developing economies are growing, lowering poverty and providing social mobility for an increasingly large part of the world’s population.

Simultaneously it is clear that our consumption and modes of production are unsustainable depleting resources, leading to ecological crisis and ethical considerations. Architecture as a discipline has a hard time operating in response to these shifting conditions. Technological progress, social shifts, ecological urgencies and global concerns are raising public debates about ethical boundaries.

The dichotomies that are at the basis of architecture as a discipline are collapsing, the borders between seemingly opposite nations are shifting. There is no clear distinction anymore between nature and culture, between environment and building, between interior and exterior, between digital and material, between mediated and bodily experience. These issues have the potential of rethinking and our modes of operation and as architects we design embedded in this expanded field.

Starting from a field trip to Teufelsberg and Field Station Berlin and by reading, presenting and discussing examples and theoretical texts, the aim of the first part was to collectively identify, map and categorise potential shifting borders for contemporary architecture. Students focused on a particular topic within the larger theme of shifting borders and explored this topic by collecting references and texts, formulating concepts and designing contextless prototypes that demonstrate ideas and relations. All output, gathered data, formulated insights and prototypical designs are collected in several thematic Field Guides and catalogues of prototypes that collectively represent an extensive exploration and reflection on shifting borders within contemporary architecture and it’s expanded field.


In the second part students were introduced to the concrete situation of WTC, an abandoned office tower in the Brussel Nord quarter that raises questions on a number of shifting borders: an existing structure without a program, a specific site context and typology, a tower with associations ranging from global economy to local challenges. A temporary school without a defined concept, were we as occupants contributed to the way of operating, occupying and making architecture. In an individual exercise, the concepts and prototypes resulting from the field guides in part I were further developed and implemented through the confrontation with this concrete situation and the questions and potential it raises. Students were free to interpret this concrete situation in terms of scope, scale, program, strategy etc...

In the second part students were introduced to the concrete situation of WTC, an abandoned office tower in the Brussel Nord quarter that raises questions on a number of shifting borders: an existing structure without a program, a specific site context and typology, a tower with associations ranging from global economy to local challenges. A temporary school without a defined concept, were we as occupants contributed to the way of operating, occupying and making architecture. In an individual exercise, the concepts and prototypes resulting from the field guides in part I were further developed and implemented through the confrontation with this concrete situation and the questions and potential it raises. Students were free to interpret this concrete situation in terms of scope, scale, program, strategy etc...

SPECULATIVE FUTURE OF THE WTC I by ANNA ECKES

From the inside (it‘s absurd) it seems even larger. The once empty skeleton is now filled with a chaotic proliferation of emerging technologies: twisted wire intestines, ragged metal lungs, a network of digital veins, dense in one place and sparse in another, all spreading from floor-skeleton to floor-skeleton.

Structure adapting to the flux before your eyes.

It seems as if the designers didn‘t provide even specifications for the architecture and only the most basic input data went into the core of the structure and networks of the stairs and elevators: the range of the boundary conditions and a few initial steps for the transformations. It was as if the Tower, driven by the technological fluctuations, algorithmized itself conjuring the interactions with the city of Brussels into form.

You find yourself submerging deeper and deeper into an autonomic sphere of the building, following unknown tectonics, learning the morphology of this alien space. Travelling down towards the very foundations between ever changing atmospheres of physical and digital landscape you observe the disparate fragments of the structure, shifting from one to another. Tower’s mass and installations constantly crossing paths and wires, coping, adapting and glitching out as their relationships are continually re-networked and auto-updated.

Maybe it’s the Tower’s final form emerging, structural density multiplying to infinity or maybe, you are in fact looking at the dying architecture of the building, and that before long – in a day or two – it will cave in upon itself, subside and decay.

The project is an exploration of the WTC Tower and its possible futures. With the contemporary conditions and trends changing so fast that we can no longer make any valid predictions, so will the Tower’s structure and the infrastructure transform, reform and adapt. 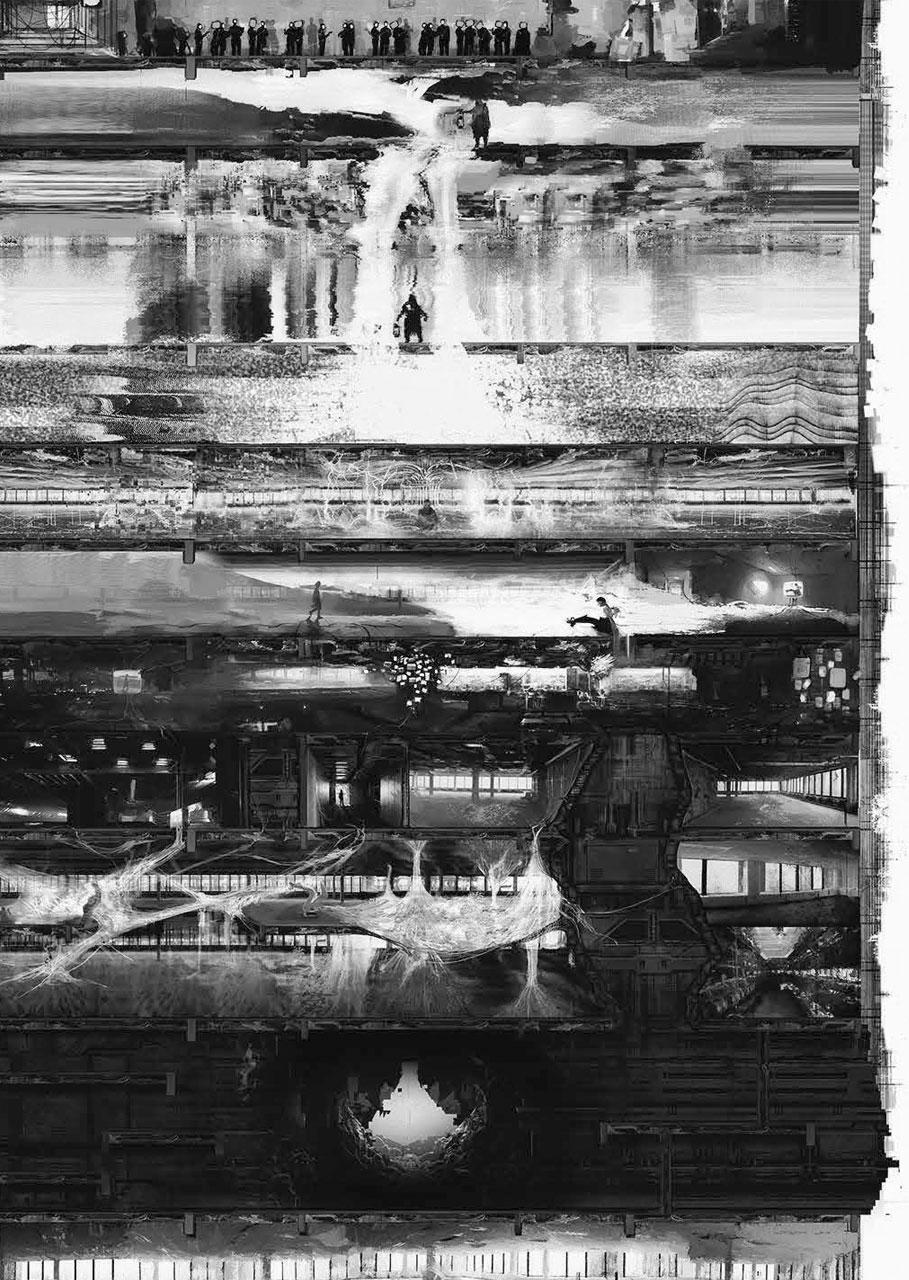 The current state of the WTC Tower as an object which has lost its purpose, is a reflection of an urgency in the bigger picture of Brussels. The trend of ever expanding the built and dismissing the re-use of what was once built has left a considerable amount of vacancy scattered around the city. Whereas now these unused spaces are regarded as a cancer growing in the city, we could use its potential as intercommunicating vessels to accommodate the fluctuations of density.

Density fluxes are mostly defined by their speed and quantity. The vessels should be able to allow different types of fluctuations. Rather than creating a specific design for a specific flow, the intent is creating a framework focused on the relation between its structural elements and the circulation and the flow of densities within.

Using the WTC Tower as a case study of a vessel for density fluctuations resulted in a variety of structural typologies to explore the effects on the possible flows. There is a gradient in these typologies. While the most dense elements are located at the base, the tower gradually dematerialises as we move towards the top. Within each system a gradient of density is integrated.

The vertical circulation follows the conceptual essence of the structure, dematerialising from I big closed off staircase core to multiple smaller, transparent stairs. Both structural elements and circulation typologies allow the variations in fluctuations from controlled, predictable flows to an extreme freedom of possible flows.

Rather than a specific, detailed design, the final representation is a dynamic, situational study of the fluxes within a fixed framework. 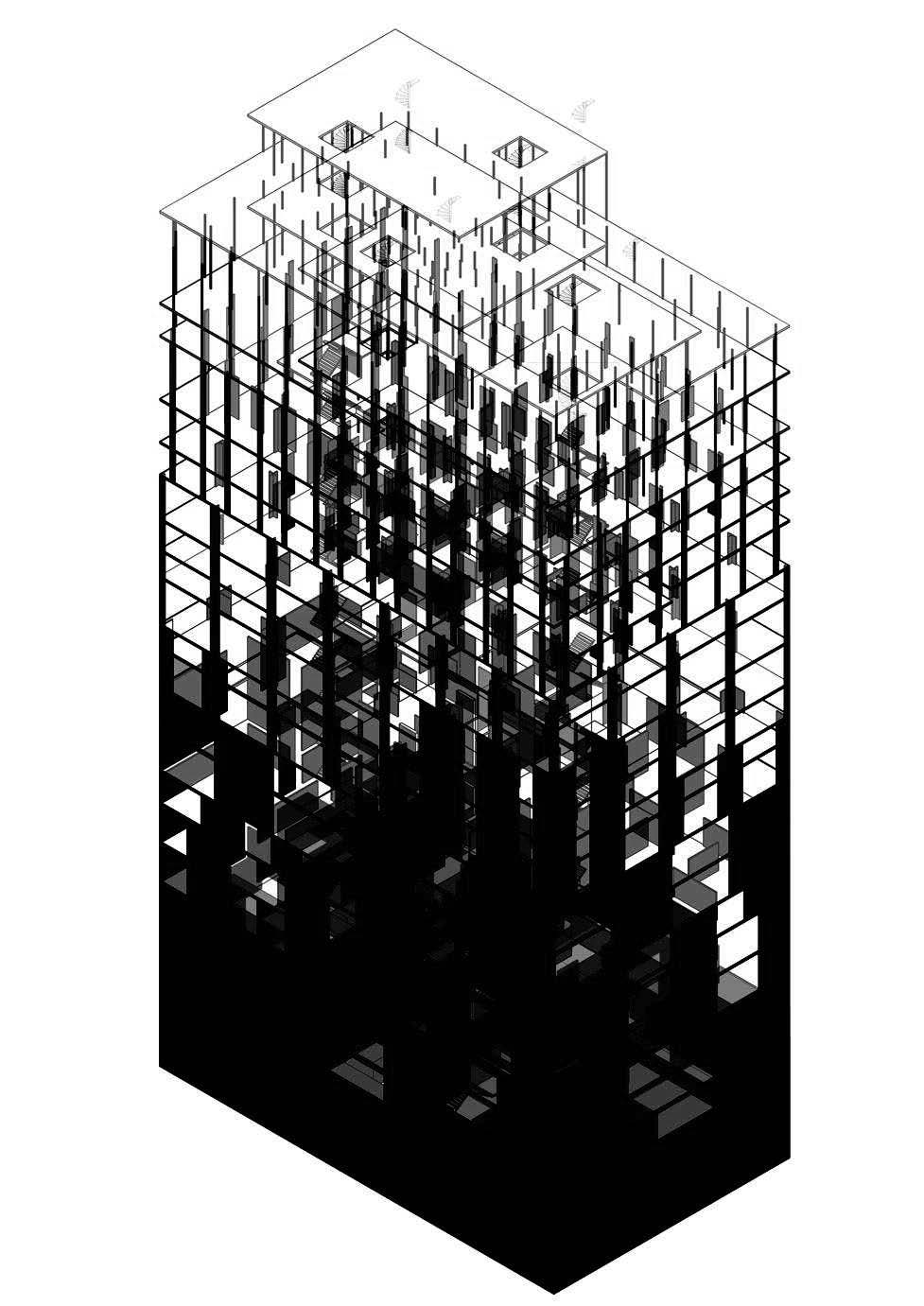 In a consumer capitalist technology driven society, personal data has probably become our most valuable asset. In this time where Corporate surveillance and automation are no longer taboo, we face the creation of a new massive un-working class: “The Useless”. people devoid of any economic, political or even artistic value, who contribute nothing to the prosperity, power and glory of society. This useless-class will not merely be unemployed - it will be unemployable.

In a not so distant future, the WTC buildings have been bought by Brussels International Testing Company & Housing or B.I.T.C.H. They offer the useless a way out of misery,a new purpose in life.

By registering and signing as employees of ‘BITCH’ they get a place to live and access to their basic needs. The useless will be introduced to - and ‘educated’ about the world of the High society. Their jobs will consist of being placed in decadent, luxurious spaces and acting high-end while being monitored and surveilled every second of the day. These jobs differ in time and duration depending on the nature of the activity or spatial experience that will be tested. They live a Comfortable and carefree life in return for data’. 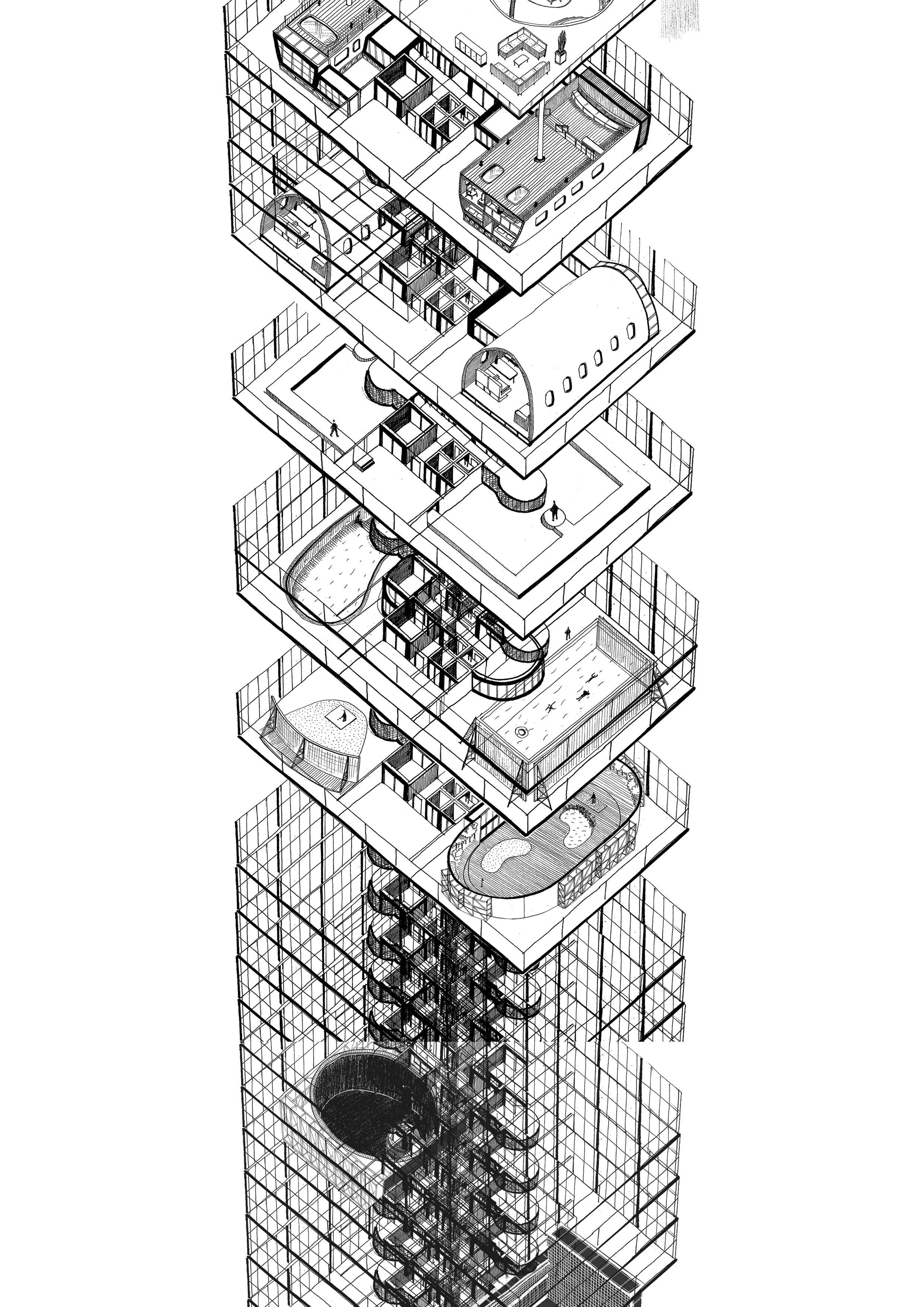 Exploration of the architectural prototype after the singularity.

As described by prolific scientist and theorist Ray Kurzweil, technological singularity is defined as a moment in human history where the human intelligence is artificially enhanced to transverse and transgress into a form of intelligence that is not a direct consequence of natural evolutionary processes, but rather as manifest destiny, or artificial intelligence. Kurzweil defines this historic moment as a necessity that originates as an outcome of our own shortcomings to adapt into the hyperbolic growth in the speed in which collective technological progress evolves.

It is defined as an intended and designed form of human evolution, both cognitive and material, defined by our own lack of understanding and ability to comprehend the tools that we create for our own existence due to our stagnant and slow biological progress. Yet it is bound to become the foremost medium in which we will re-calibrate the relationship between humans, technology and nature.

Such proposition has its precedent in our understanding of the self-organizing, or intelligent, properties of natural systems. Our analytical models of self-organizing, self generating and self evolving systems are based on the mathematical abstractions we created to translate these systems into media that we can comprehend, communicate and eventually materialize.

The objective of this project is to create a coherent architectural prototype that will act as a formal vessel to fulfil a number of idealized conditions related to hierarchy, structure, program and other architectural criteria after the singularity. The end goal is to create an architectural system that can later on be tailored toward a particular context or problem, allowing the system to “self generate” based on varying parameters.

Terminology used to accompany this process: 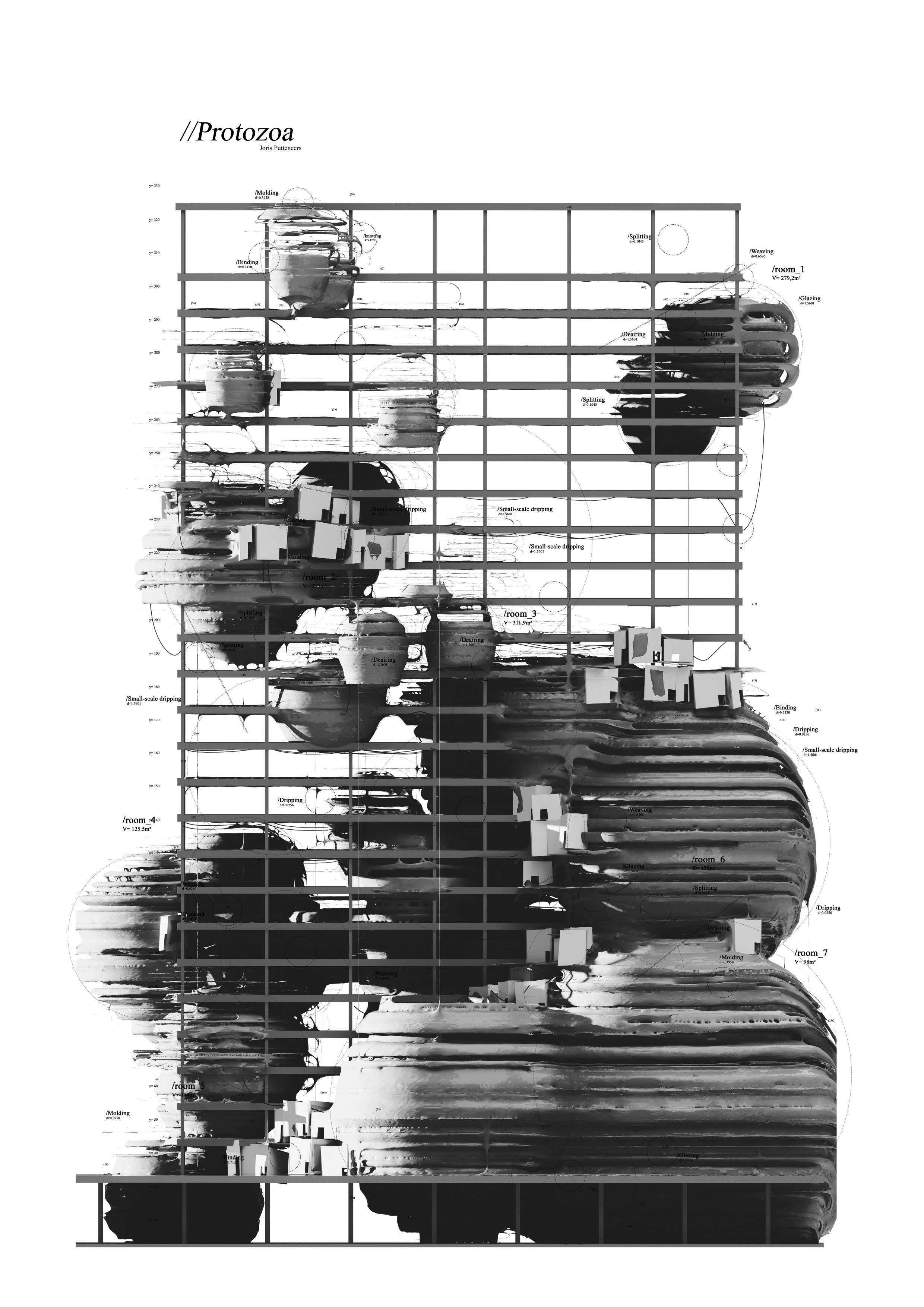 The project presents new sacrum of the anthroposcene embodying the cult of temporality in adominant form. Set in a not-too-distant future, it presents new sacral typology in the digital age,translating pseudo-scientific and cultic methods of the anthroposcene into architecture and, as such,embodies and formalize unconscious powers filling the spiritual void in the times of shift. The exemplary building itself stands as a symbol of the holacratic, binding the earthly and the digital in a fragmentarized „house of the Technological Spirit”. Unlike the cathedral in the medieval times, it emphasizes cycle, presence, and „now”, and blurs identity of those within the cult, forming aperfect consumer, who willingly gets lost within a networks of the Cloud. A place for inwards perfection, and an epitome of individualism, yet, with the innerworkings of the cultic machinemystified. Perfection, then, or a ruthless exploitation?

The scenario presented feeds on the plausibility that one is willing to accept any given reality,exposing the crisis of identity, as a result of an extreme secularization of our times. It presents a journey through different manifestations of sacrality within a project and forms the microcosm and macrocosm of their own, on the likelihood of Christian cathedrals, scattered through Europe. The values it presents and cosmos it stands for, however, are largely different, as is the way of life-enhanced through technological lens. In place of the pilgrimage – it puts stagnation, and in a place of journey to an occasional mystery – a constant resort. Layout of the new cathedral is fluid and indirectional, emphasizing uncertainty. 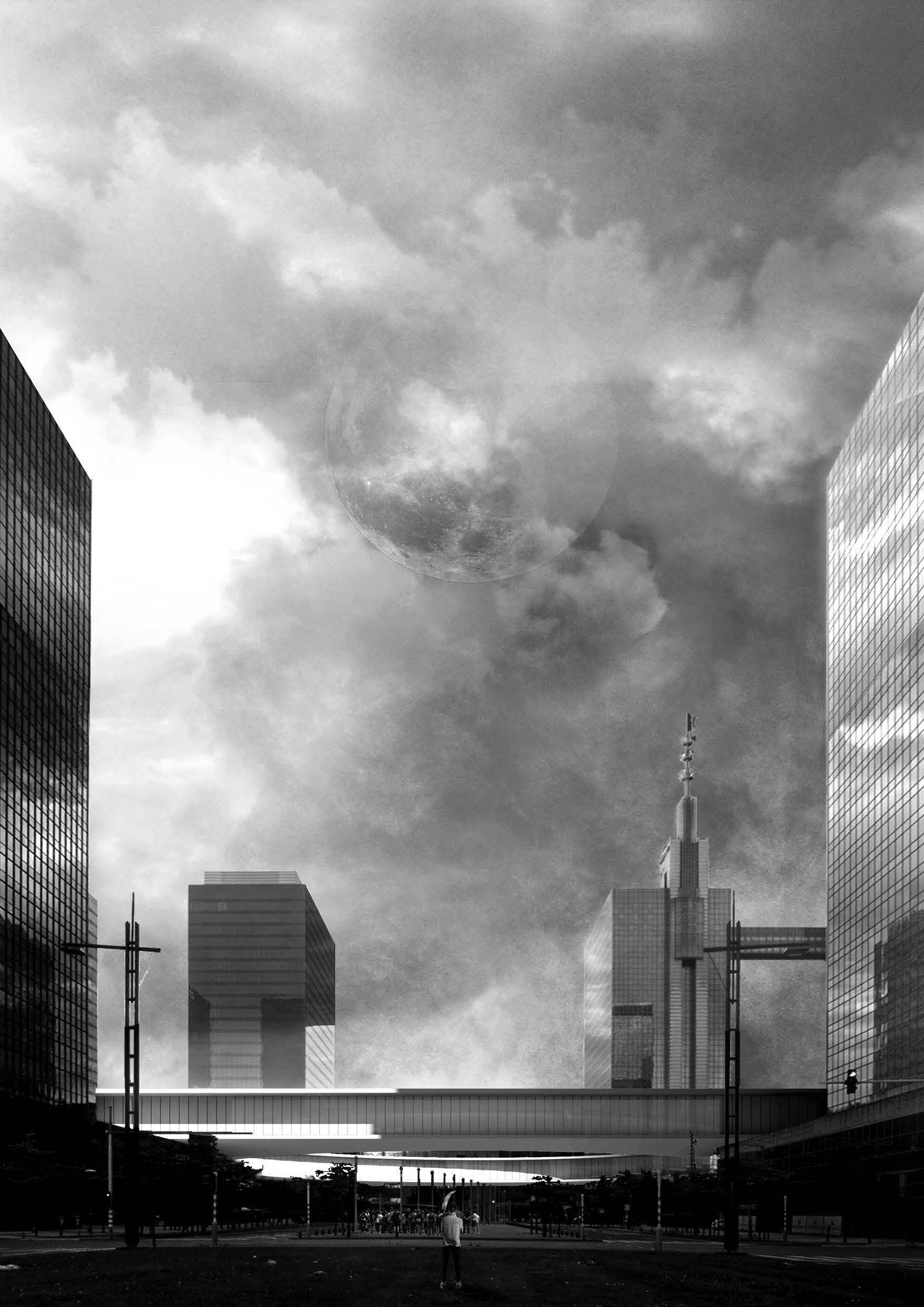