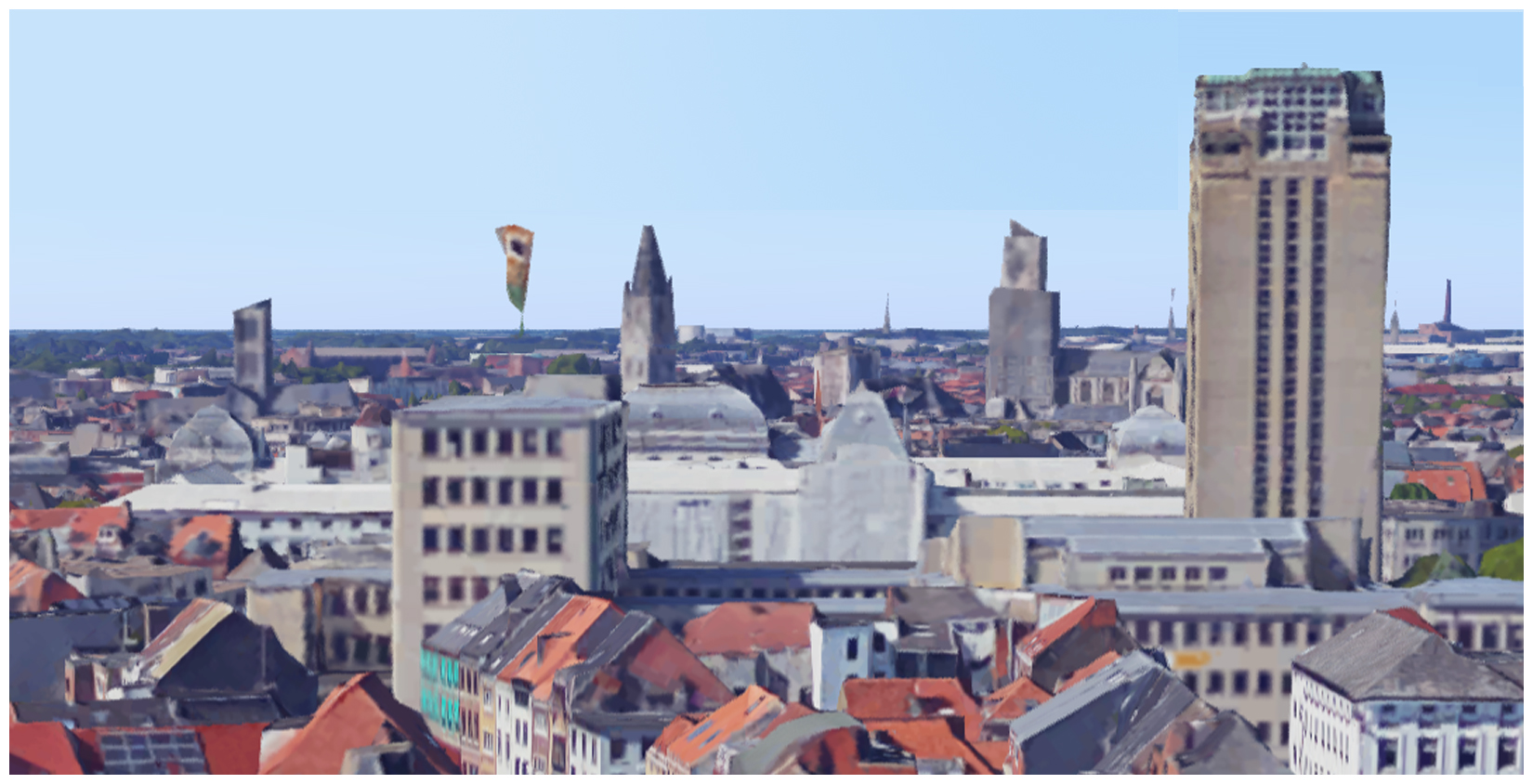 As we hover weightlessly over the city, a familiar scene appears for our eyes, at least on the screen in front of us. This familiarity is uncanny, it resides in memories of mediated experiences rather than embodied ones. It is reminiscent of the 'establishing shot' we see in films, the opening shot that sets the mood and situates the story about to unfold in time and place. As we continue our movement, towers come into view and fade into the background, we recognize a familiar skyline, our eyes looking for clues. Our gaze however is not a cinematic one, there was no storyboard before capturing this scene, there were no apparent choices made in terms of framing and camera movement; the scene a result of a blind capturing that, at least seemingly, does not discriminate, everything is recorded with the same fidelity, the same resolution. Although, rendered here as a static video-loop, we can move around in this world, by zooming, panning and scrolling, similar to how we move around in the modelling environments we spend our time in while designing as architects. The world is rendered only where we look, the resolution decreasing towards the horizon, just like in a single-player video game, it’s a solipsistic world, a game without goals, enemies, loot-boxes or rewards.

The environments in which we operate as architects are increasingly saturated with digital technologies: internet-of-things, global communication and transportation technologies, mobile devices, increased satellite coverage, location based services, ubiquitous computing… What we see a one appearance of the technosphere, a term coined by Peter Half in 2014, to describe the spatial layout of interconnected devices, people and environments. It is an interface, it is data rendered as visual for our eyes and understanding, that reveals nothing of the actual spatial layout of the technosphere, which we only know through metaphors such as the ‘cloud’, or renditions in popular culture such as the ones and zeros flying around in the matrix. This ‘accidental megastructure’, which Benjamin Bratton calls ‘the stack’, borrowing a term from software development, is not designed but emerges as a set of related fields and gives rise to radically new geographies. The slick interfaces of our connected technologies come at a price, they are enabled through a dark side of resource depletion, cheap labor, exclusion and pollution. The material impact of these technologies is so extensive it will leave a lasting imprint on our planet, we are effectively terraforming the our planet, prompting geologist to established the Anthropocene as a new geological epoch.

This world provided to us as a ‘free’ service provided by google the owner of this world, as revealed by the text in the bottom right corner. Free as in we don’t pay with hard cash, not as in freedom. Google, a company that sells screen real-estate targeting our eyeballs, to the highest bidder. Or if dopamine labs is involved, a start-up founded by tech-savvy neuroscientists, directly targeting our neurotransmitters, effectively controlling the amount of dopamine released by our brains, making apps and service highly addictive.

Google’s tagline, which reads, ‘don’t be evil’, reveals that the technologies they bring into the world are not inherently good or bad. We only need to think of the role Facebook and Cambridge Analytica played in the most recent U.S. election, or filter bubbles, or fake news, or FOMO, to see the impact these technologies have on the society at large. As Douglas Rushkoff argues in his book ‘Program or be programmed’, we are not the clients in this world, but the product. Every technology is an extension of our human capacities, but simultaneously an amputation. Through outsourcing parts of our mental capacities, we have effectively all become cyborgs, willingly or otherwise.

The other text at the bottom of the screen further reveals the data sources this world is constructed from: Landsat, an earth scanning service of NASA – The National Aeronautics and Space Administration; N.O.A.A. - The National Oceanic and Atmospheric Administration, part of the U. S. Department of Commerce; GEBCO - General Bathymetric Chart of the Oceans; N.G.A. - the National Geospatial-Intelligence Agency; the U. S. Navy. All but one, government agencies of a declining superpower, in their current political climate facing substantial funding cuts, with the exception of the last two, which are military in nature.

The three historic towers of the city of Ghent are Sint-Niklaaskerk, Belfort, Sint-Baafskathedraal, are an expression of their time, of ambition, of power and identity. As our societies and cities change, towers become monuments over time, tourist attractions, relicts of past ambitions, symbolic and material landmarks. All these towers have websites, demonstrating the ambition to be landmarks also in this digital world. Shifts in power lead to new towers emerging on the skyline. The fourth tower of Ghent, the university library by Henri Van de Velde, or Boekentoren, is an indication of a societal shift. Where the three historic towers of Ghent find their origin in religion, politics and commerce, the fourth tower indicates the rise of science and the university as power.

A strange object comes into view, a fifth tower emerges on the skyline, it’s a glitch, an anomaly, an impurity a byproduct of the scanning process. It is intriguing as an architectural object, a foundationless, one eyed, low-poly and badly textured object, but it is not designed. It results from a meshing algorithm not being able to process the structure and porosity of a construction crane, an algorithm looking for solid volumes in the scanning data, the cabin of the crane apparently just above some threshold value to be registered as a volume.

I want to take propose to place this object in the linage of towers that indicate the shifts in power in our cities. This proposition is a provocation, and to be honestly a bit of a joke, the shift it indicates is not. It is no coincidence that the fifth tower is located close to the fourth; the crane was part of the construction site for the restoration project of the Boekentoren. The books of the were moved from the tower to an underground depot, where they are all scanned by Google as part of their library project. Another free service making all books publicly accessible, indexing their content, making them searchable.

It represents a shift from knowledge, carefully collected, debated and peer-reviewed, to data, aggregated, tagged, shared and accessible. A shift from scientific models, using our human capacities, in an attempt to understand and explain the world, to an operational, predictive and heuristic models, that when fed enough data can predict all sorts of phenomena through raw computational power without the need to understand them.

Compared to other design disciplines architecture is rather slow in embracing technology, but buildings and cities are increasingly becoming computers we live in and with. As the Volkswagen emission scandal shows – where cars were programmed to detect whether they were in a test facility or on the road, and adjusted their emissions accordingly – who programs our devices and environments and for what reasons is of critical importance.

Architecture as a discipline has appropriated digital technologies mainly as a new set of tools, a medium for exploring formal, compositional material articulation of architecture. Has this focus on disciplinary questions and approaching technologies as just another version of pencil and ruler, made us blind for the actual spatial and material, societal impact of these technologies?

What do the technosphere and the anthroposcene mean for architecture, a discipline both complicit in and seemingly incapable of responding to the challenges these pose? Can we engage this technological layer, beyond the metaphor or the image? Can we explore the geographies they give rise to? What can architecture learn from looking at contemporary phenomena, emerging fields and other practices? How do we as architects proactively engage the complex reality of today rather than passively waiting for design briefs and projects?


The Fifth Tower from corneel cannaerts on Vimeo.